After building a reputation as a solo performer and scoring placements on hit TV shows like "Private Practice, "Burn Notice", "Hart of Dixie," and "The Jersey Shore", L.A. based singer-songwriter Austin Hartley-Leonard is charting new creative territories with Broken Anchor. Teaming up with producer Brad Gordon, Hartley - Leonard offers up "a stunning ride through a songwriter's exploration of life and love, created with a clarity of vision only the journey can provide" (KCRW) on Broken Anchor's first full length LP, Fresh Lemonade.

Featuring songs fleshed out in live performance and a series of 3 critically - acclaimed EPs (Broken Anchor Volumes 1-3), Fresh Lemonade coalesces Hartley-Leonard's electric musical and life experiences into a sound Los Angeles Magazine calls "Budweiser tallboy music, best heard coming from the stereo of a used Cadillac that required way too much effort to whip back into the street legal shape...{as if} the members of Band of Horses had grown up somewhere along the Pacific Coast Highway." From the melliflous shoegaze guitar textures on "Leave the Light On" to the rippling waterfalls of synthesizers in "Dear Diary", Fresh Lemonade  showcases a band that keeps its feet planted in lo-fi tradition while its emotional head floats wistfully in the clouds.

2013 has already been an exciting year for Broken Anchor. A residency at L.A.'s Piano Bar led to Hartley - Leonard being joined by Mike Duffy (ozamatli) for an east tour. The first video from Fresh Lemonade "Never Leave Me Alone" has been featured on Spinner, MTV Hive, and Others.


R. So, firstly, might we dive right in and ask you be so kind as to explain how would describe what you are trying to achieve with your music? What are you chief motivations, what are you trying to convey with your work?
BA. I'm, just trying to write great songs, and I'm hoping to achieve a certain mood in the listener with every song. Grooves are super important to me, so if the listener is nodding their head or tapping their foot...or bawling uncontrollably... I've done my job (for the record I don't think I've ever achieved that last thing ;)

R.You have been releasing albums for a little while now, and I wonder if each one is its own separate entity, conveying your artistic wants of the time, or whether you have some larger, over-riding artistic vision which each release explores a certain facet of?
BA. Each album is only a snapshot. A looong exposure snapshot.

R. Your lyrics are something intriguing indeed. You seem to move between a kind of playful whimsy into much darker and at times meancholic. What is your writing process as relating to your song texts? Do the words emerge before the music or vice versa? What do you find yourself most often driven to write on when the pen is in your hand?
BA. The music always always always comes before the lyrics. I've tried a thousand times over the years to just go to a coffee shop and write lyrics without a guitar in hand and the result is always laughable. At the end of three hours, I'll have a blank piece of paper except for one sentence that says...like...

"All these dreams...the road is long..." I mean...really bad shit. When I have to slot lyrics into the framework of melody and chord structure, the actual fitting in part is what makes them grow and the message in them grow. I couldn't tell you why.

R. Do you find yourself drawn to particular themes or subjects? If so, what are they?
BA. All the same stuff...hopes, loss, etc. Those are universal but really, what else are you ever going to experience that is gonna move you so much that you're inspired to create art about it? I've never had a bagel that was so delicious I had to express it in song, ya know?

R. What discovery in life has surprised you the most?
BA.  Sobriety, It's a motherfucker of a good time ;)

The Highly anticipated debut LP , Fresh Lemonade from Broken Anchor will be released on September 17, 2013. 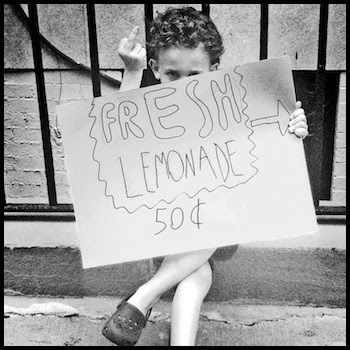