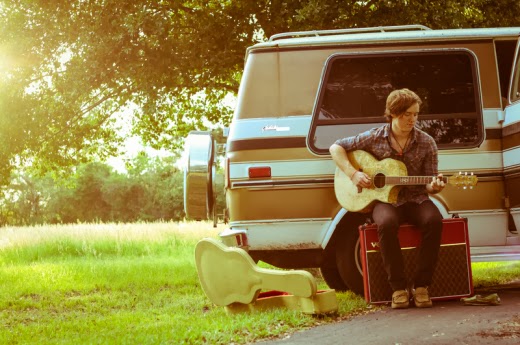 Review: There's a universal fact that no matter what happens, the world keeps spinning blindly on it's axis and we continue helplessly with it.So we hold tight to this speeding mass we call home and keep ourselves busy whilst doing so with mindless monotony and walls of sound. But within these moments people take the time to take stock, sit down and write their thoughts and lay them across acoustic strings. Noise and chaos become calm, important melodies. So, take a moment and listen to Ian David.

A man whose time taking time to write otherwise overlooked lines is worth the time to stop and pay heed.Ian's unmistakable hook is that he is just as everyone else. There's no dynamic screams of diversity but an individual who puts what we all at times feel on paper.And the majority of acoustic guitar focused songs re-enforces the reality because the music isn't coated with effects trying to be something it's not. His collection of songs is a chronology of growth and development, childhood dreams and mature realities. Though there's a stunning feeling at times within both lyricism and music that growing up may just be finding new ways to be immature because behind every line is a man smiling whilst singing it.

Though listed under the alternative genre I would associate Ian David with Folk/Pop too. But I implore one and all, especially those fond of Verve Pipe, the Wall Flowers, Iron and Wine and Augustana to listen, like, follow and buy.You'll be amazed by the simplicity that turns into intensity through the compositions, accompanied by relative lyrics that leave you wishing you'd found a way sooner to phrase your own words the same way.Slow down, breathe, relax and allow Ian David to ease into your atmosphere so you may enjoy so many moments and memories that would otherwise be missed, the world may not stop when you close your eyes but nor does the music. His EP titled Coffee&You was released back in September, 2013.

To hear and learn more about Ian David go to:
Web
Ian David