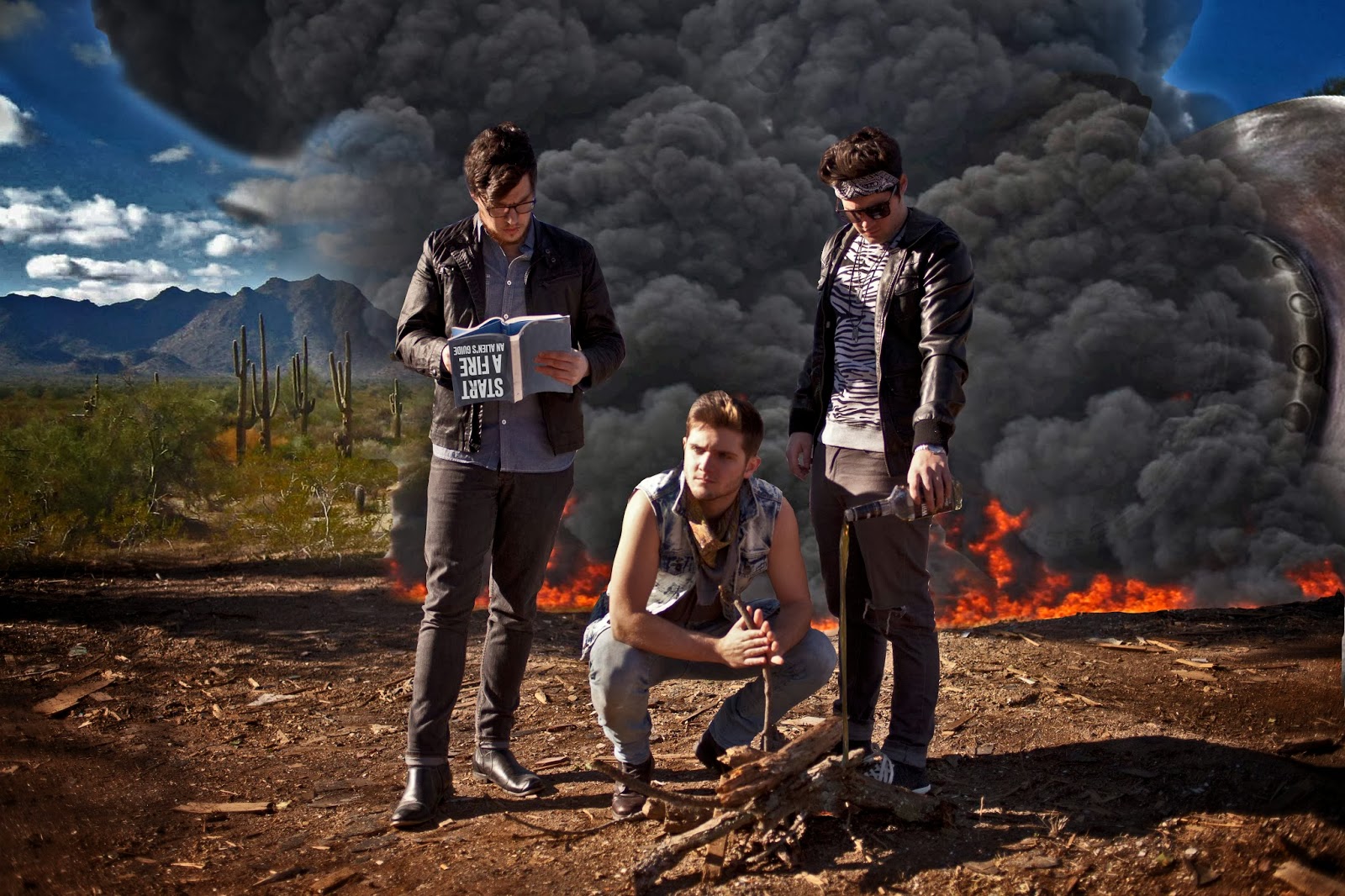 Marshall, Red and Rocco may sound like fictional characters, but in reality, they are the masterminds behind Nashville-based classic rock influenced pop band Telegraph. After four years as Northern Virginia pop/rock quartet, Sing Me Insomnia, brothers Marshall (vocals) and Red Cunningham (guitar/vocals), along with best friend Wes "Rocco" Beale (bass/vocals) found themselves relocating to Nashville and relaunching as Telegraph.

With epic guitar solos, falsetto vocals, and catching melodies, Telegraph craft something unique yet familiar, and overall undeniably fun. Drawing from 70/80s rock icons, Van Halen, Def Leppard, and Guns 'n Roses, to current pop stars such as One Direction, Katy Perry, and Kelly Clarkson, Telegraph blend classic rock power and craftsmanship with modern pop production and energy. Their infectious songs earned them one of four prime spots in Belmont's Rock Showcase, creating anticipation for their debut EP to be released in early 2014. The music video for the title track "Rewind," is already earning buzz online, with its perfect mix of nostalgia and pop culture causing viewers to obey the lyrics and hit rewind again and again. We caught up with the fellas to see what's all the buzz behind their new video.

R. Thanks for taking the time to chat with us. Why did you pick your band name? How dod you form? Why did you decide to play the genre or genres you do?

T. Thanks for having us! Telegraph is the name of a pretty large street in Northern VA where we all come from. It was a road that Marshall and Red would take on their way to church every Sunday and I guess it really just stuck with all of us. We wanted something simplistic that people could remember, but something we’d really be able to brand with our sound and image.

R. Who writes the songs, what are they about?

T. For this EP we’ve really all pitched in quite a bit. Marshall and Red tend to take lead with the writing. I’ve recently been forcing myself in on the writing sessions so Marshall and Red have been great putting up with me in the writing room. I’ve been able to learn a ton from them. In return they get a lot of great ideas from me such as, “okay, then big ass guitar solo there…” and “okay, BGVs like all of us, like OHHHH OH!” So whenever you hear either of those things, think of only me.

T. Think “big.” If we had budget for pyro and t­shirt guns at every show we would. We’re the kind of band that plays a pizza joint and doesn’t rest until the crowd is out of their seats. We have some of the most talented people in Nashville playing with us, so they really help us take it to the next level in terms of “bringing it.”

R. I'm loving the 70/80s look and sound behind the new video "Rewind". Where was this shot, and is this going to be an ongoing theme for future videos?
T. We shot all of the performance footage for this video at SIR Studios in Nashville, which

is a great place run by some great people. If they see this in their google alerts, big ups to
them for having such a great place, we love those guys. The intro/outro sequence was shot in our own living room and the bobble head sequences were shot in our dining room turned studio.

R. What inspires you to do what you do?
T. I think we’re all so inspired by so many different things. The music scene in Nashville is
so supportive, but at the same time, totally frightening. Nashville is notoriously a tough town to play for, but if you channel some of that into inspiration and motivation then it can only craft you into a better and more creative artist.

R. What's the best and worst thing about playing clubs?
T. I can legitimately say that every show we’ve played in Nashville has been a great experience. The only hitch that comes along with Nashville is that more often than not there’s about 100 other shows going on at the same time, most of the time within the same block of clubs. Every now and then you’ll have one person at a club who is not enjoying the music and they show it as much as they can through body language, or by yelling it, but if I let stuff like that bother me I would have stopped in middle school.

R. Tell us about the next shows and why we should be there.
T. We’re playing an awesome benefit show at Rocketown in Nashville, April 1st. The show is benefiting Hands of Hope in their efforts to promote awareness of domestic violence. The show starts at 5:30pm and tickets are $5. If you’re too busy organizing your sock drawer that night, or you just aren’t a Nashvillian, signup for our email newsletter. As soon as we get a show on the books we’ll hit up everyone near that city and let them know to strap on their party hats.