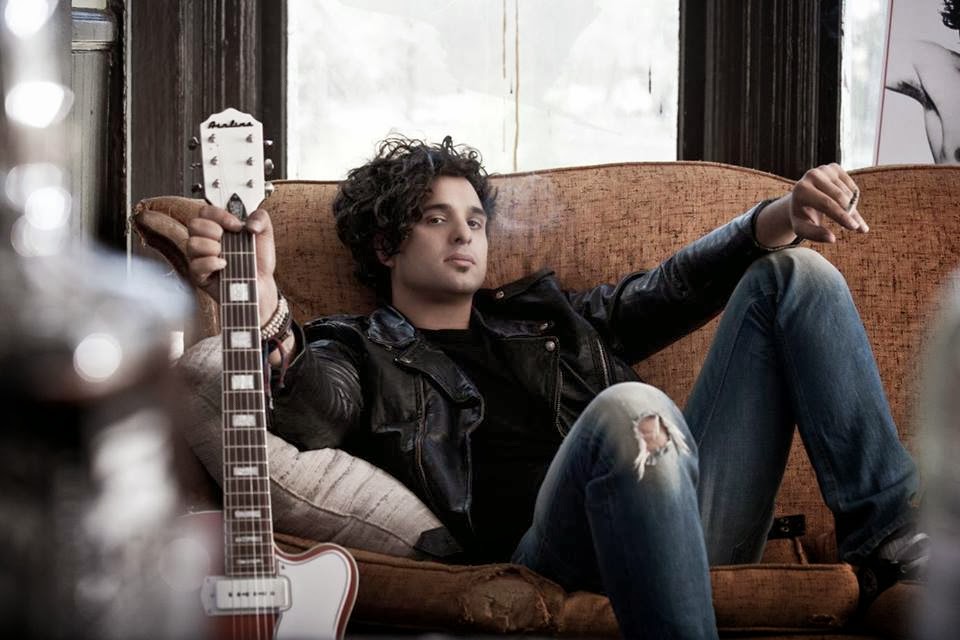 Unbridled, unleashed and almost uncontrolled enthusiastic talent -that is Eric Zayne and his electronic-influenced, soul and blues-infused, pop-inflected and sometimes just plain over the top creative funk/pop/rock.


I first saw him live at a pre-Grammy Party in LA and knew this was a talent going places fast.  We talked afterwards about his gig at Sundance and his upcoming gigs and recordings.  Eric and his band can turn on a dime from infectious alt. Pop to ballads with a twist. He is always trailblazing, always out of the box and into your pleasure centers. Put on your headphones, clear out the dance floor, forget everything you think  you know about rock and pop. Whether he is live onstage or erupting from a EP, Eric Zayne’s music mainlines a pure dose of the most unique sound coming out of the LA rock scene today directly into your brain. R360 sat down with Eric Zayne and we were in for a wild ride.

R. Eric, you have been very busy lately.  You played at the 10/20 run last weekend in San Diego. You played the Sunset Sessions last week in LA. You are recording a new EP – which you are calling the mixtape, we will talk about that for sure – and you are getting ready for South by Southwest.  Did you give up sleeping for the first quarter of 2014?
EZ. It certainly feels that way.  It is funny you mentioned it because I was thinking when 2014 came in, the train just went faster than any other ride I have ever been on.  I don’t know what kind of planetary alignment happened when 2014 kicked in but it hasn’t stopped. It has been just one wonderful opportunity after the next and I want to be ready for all of them. In a way definitely, I’m giving up some sleep.

R. I am curious about this 10/20 concert in San Diego. You were singing in the middle of a foot race?  Were you running or playing music or both?
EZ. That would be an interesting gig if I had to run a marathon with my instruments and my band.  No, we were on the running trail of the marathon. We had our own stage overlooking the ocean.  We had a pretty loud PA system so we would play to encourage the runners to keep going.  But many of them actually stopped  or turned around and ran back to grab a CD, which may have made them late to the finish line, but it made me pretty excited.

R. I can see them running, stopping turning around, dancing, grabbing a CD and then running…pretty funny.
EZ. Yes. And we were like “don’t stop, go, go, go!”


R. Let’s talk a bit about your music. The song that first turned me on to your music is Neptune. I know that song is about desire, about wanting something else, maybe something you can’t have. The video that you made with that was very powerful.  Did you design it?
EZ.  My manager, Steven Cohen, and I always come up with the ideas together.  I have been using the same director for all my videos, Collin Duffy. This time we decided to do something very simple, because all the other videos are explosive and huge.  So we said let’s do something very simple that stays in one spot and is visually captivating and has the sexual tension of the song.  Also, my music is very inclusive of all cultures. I have no judgment of any cultures.  I grew up in a multi-cultural family and I grew up all over the world from Africa to Canada etc., so I want my music and my audience to always feel welcome in my heart.  So we decided to bring in couples from all kinds of cultures that sometimes may be judged by the outside world, and we decided to bring them in. You can be safe here because Neptune is the idea that you are reaching for something for the unattainable, that there is something inside that is a desire and we are all have it.  I wanted everyone to feel that common ground.


R. In the video that you include gay and straight, black and white and mixed couples. Were you  making a social or political statement?
EZ. It is embedded in the fabric of my music.  I don’t consciously want to be a political activist, but I know that music has a power  that breaks through boundaries and I think it is the responsibility of an artist to melt the dividing lines between us in a way and reunite us.

R. Your most recent hit, Maneater, which has an epic video of a giant woman destroying my hometown of Los Angeles. Was there a man eater in your life.
EZ. Oh yeah., There have been a few.

R. What is your response to criticism that Maneater,  in its images and especially in the lyrics, reinforce a medieval stereotype of women as inherently evil and predatory?
EZ. It is interesting how people can judge a song that is just a perception of a particular slice in reality of  a very specific moment in time that has actually happened to a person.  It is not a judgment on all women and it is not pointing to my personal belief on how women are. In my opinion, women are majestic – advanced way beyond males.  It points to a situation that people can get into in a relationship when they are just eaten up by the other person because that person’s power is so much stronger; but they love it. The fact that I called it Maneater and sang about a woman is because I am man.

R. Are the guys you play with your permanent band?
EZ. Yes. They are absolutely people I want to keep together. Once in a while I will play an acoustic gig, but my vision of a live show is from people I have looked up to like Prince and others. My live gigs are always a very powerful experience as you have seen, so we are staying together.

R. Where were you born.
EZ. I was born in Montreal, Canada. When I was 11 days old I was taken back to my parents' home in Congo. I was about 10 years old when I left. A civil war started and the embassy called my dad and said there is one seat left on the last plane out of the country and it leaves in an hour. My dad and my brothers were collecting weapons and fortifying the house. There were already bullets flying from mercenaries and looters. An army truck came and grabbed me up and put me on the plane. The family seated scattered to survive. My family and I were reunited about 8 -10 years later. 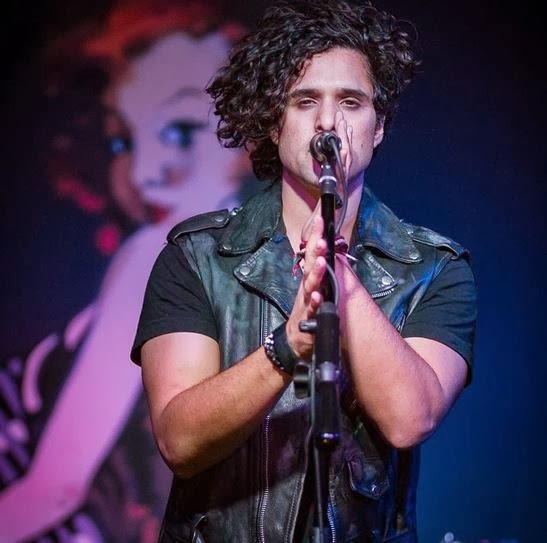 R. You are producing a new EP which you are calling a mixtape. You have assembled a surprising mix of people on it. You have Matisyahu - and orthodox Jewish rapper Amber Riley, an African-American singer/tv star from Glee, Rozzi Crane, and emerging rock singer recently signed Maroon 5's Adam Levine; and King Blaise, a rapper from Cameroon. How did you think of that group and how did you pull it off? EZ. We are calling this a mixtape-title is Autobiograme - because they will be free online releases. We are not aiming for a commercial piece of work that could necessarily get radio play, but something to show your personality and diversity and collaboration. I didn't have a plan - I knew I would meet people as I went along. I knew from my background that a diverse group would come.

Take Matisyahu - I was studying Kabbalah and my rabbi told me I had to meet this guy and one day he called me and said Matisyahu was coming and we met and hit it off and we wrote a song in 2 hours. The song is called Freedom Fighter; it's about standing up for your rights and creating the life you want. Amber Riley came from when I did a show at My First Friday - a place where new artists perform for a supportive crowd. She was there and we connected. I knew who she was and what she did and we created a beautiful gospel song together. My manager knew Rozzi Crane and thought we would be a great fit and played her music for me. When I heard her voice I said yes we would be great together. We did a remix of Prince's Erotic City - a very cool indie electronic version you are going to like.
R. And the ep/mixtape Autobiograme will be out the week of March 10.
EZ. Yes. I have been trying to get it finished. I have been so busy.
R. Even though you are so busy you still have time for One Voice. What is that all about.
EZ. In my growing up in Africa I saw what war can do to people's lives. I always had this idea of going back when I was successful and doing an inspirational tour, replacing guns with guitar. I got interviewed by One Voice and found that that is exactly what they do. They teach kids how to connect with their inner voice, their inner peace, using music, - it is an unbelievable organization.
Last but not least...
R. Weare out of time and there are so many other songs and topics to talk about. We will have you back on when the mixtape is ready. And thank you for being with us today. EZ. Absolutely!
Upcoming Shows
03/11 SXSW Show - Austin, TX
03/14 The Rusty Spur - Austin, TX
03/29 SS Cape May - New Jersey, NJ
05/08 Showcase at CMW - Toronto, ON
05/11 Canadian Music Week - Toronto, ON
05/16 Driven Music Conference - Florida, FL
To hear and learn more about Eric Zayne go to: Web Eric Zayne Music Facebook
facebook.com/eric.zayne