Cooler by the Lake 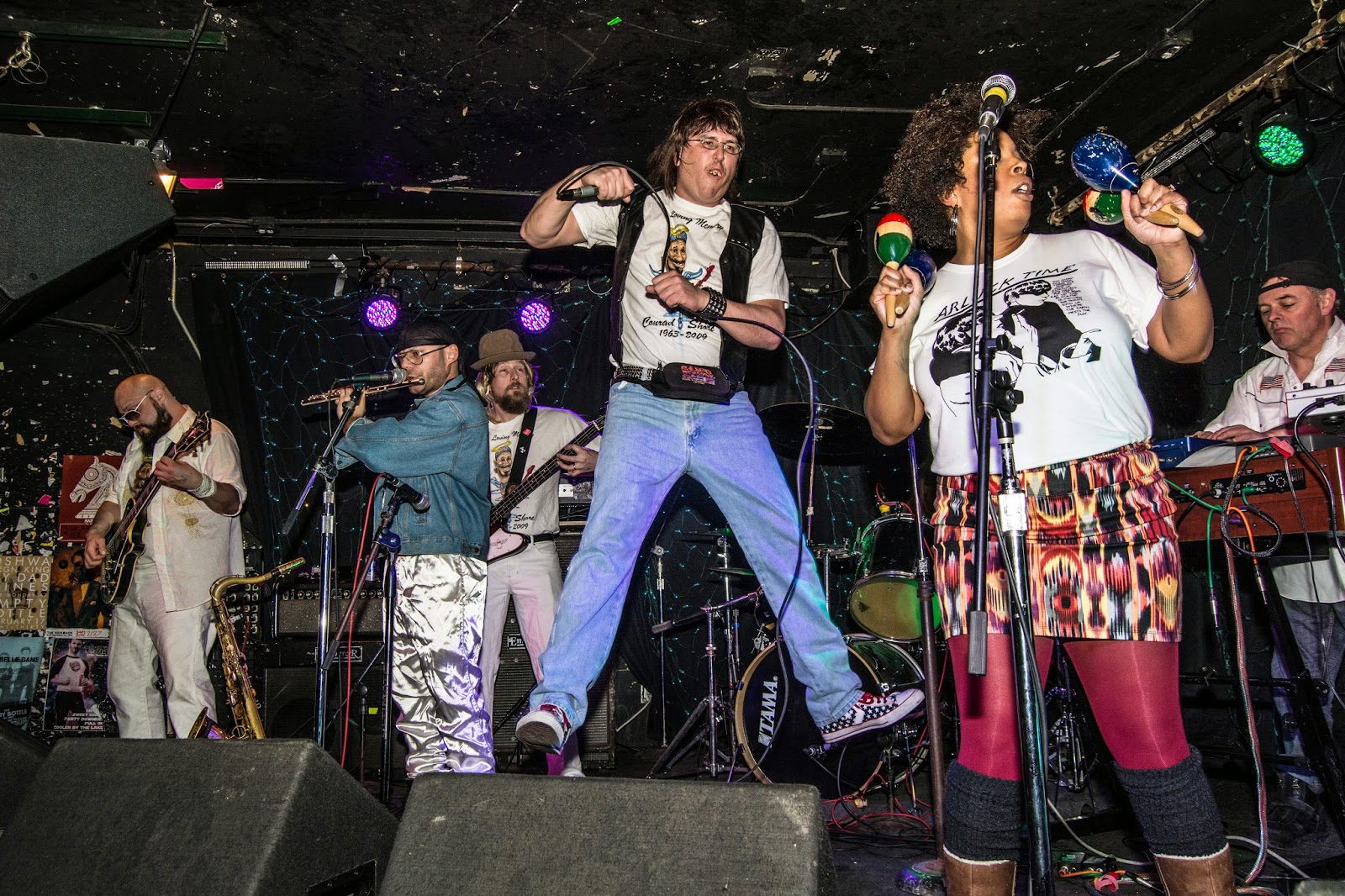 Combine tight musicianship with a loose cannon and you get Cooler by the Lake. With a two-guitar attack, rhythm section, keys, flute and sax, a dedicated back up singer and raucous singer Rory Lake at the helm, Cooler by the Lake has conquered rock clubs all over the Midwest for the last 15years. It's more then music; it's an intense rock experience.

The groups isa shaken cocktail of classic rock, psych, prog and punk appeals to all fans of rock, especially when served by wildly charismatic Rory Lake. Due to their unique versatility and amplified entertainment factor, Cooler by the Lake has squeezed on stages with rock legends Molly Hatchet, The Fixx, Asia, and Adam Ant as well as punk and indie acts Sean & Zander, Drag the River, Nashville Pussy, Cherry Valence, Electric Frankenstein, Dank Jones, and Apocalypse Hoboken. Cooler by the Lake has also performed a live simulcast of a bacon eating contents on ABC's Jimmy Kimmel Show.

Cooler by the Lake mark the end of the season with their 2nd studio album Summer's Over. We caught up with Rory Lake to talk about this infectious new album.

R. Hey, let's get down to the nitty gritty shall we... can we assume that the name of the band comes in some way, associated to living near Chicago's Michigan Lake? or are we off the beaten track?
RL. Hi. First of all, thanks for the Q&A session here and caring enough to get to know our band a little bit. Your assumption is partially correct. Yes, it's safe to assume the name of the band comes from living in the vicinity of Lake Michigan. In Chicago, it's a regular phrase you hear on the news. All the weather folk have their own little spin on it. Tom Skilling from WGN will say it's "Cooler lakeside," or Andy Avalos from NBC5 will say it's "Cooler near the lake." But everyone knows it's always "Cooler BY the Lake." My last name also happens to be Lake. So in our band's case, the name makes a lot of sense. And, if you stand next to me, or are in the near proximity of my person, well...you get the point.

R. For our audience share with us how you managed to find such an ensemble talented group of individuals?
RL. Skinsman, J.M. San Miguel and I have been playing together since the mid 90s. We've been involved in the Chicago music community for a long time so we obviously have friends in other bands. Our first bass player and my long time songwriting partner of more than 20 years, Conrad Shore, passed away in 2009. So, whether they wanted to or not, we've had members come and go. Most of our 9-member monstrosity has been together for over 10 years. They're friends from other bands who saw something different about what we were doing. They knew our live show was as large as our riffs. And most of all, they knew it would be fun. If you got that going for you, then finding the right people ain't hard. Our latest members are Wendy Ann Lisa, who I call the Lakeside Singer, Teri Fountaine who plays piano, trumpet and French horn – she used to play in some symphony orchestra in South America – and Nigel Fripp a Hammond B3/synth wizard and Canadian.

R. Can I ask what's with those teeth? Is this some kind of alter-ego character that you're living out on stage?
RL. What you see up there is 100% USDA Choice Rory Lake meat. Take me to your next barbecue. I come with my own sauce.

R. Musically speaking, Summer's End is your second studio album. What's different this time round? What can the audience expect to hear?
RL. The album is called Summer's Over. And I released it on my label, Rory Lake Presents, just like all the other releases we have. One thing you gotta know about me, is that I always go big. That goes with performing and with releasing material. Our first album was ambitious, to say the least. I mean, sound-wise, we were still developing. It was really all about our live show. That's why I produced and directed a feature-length rock-YOU-mentary to go along with it. It was a self-titled CD/DVD release. Summer's Over is a different story because we took care to not only write interesting songs, but also the musicianship is off the charts. Once we started recording the basic tracks at Johnny Z's Riverside Resort, I knew we had something special happening. I knew the direction I had to push was in production. So I enlisted some heavy-hitters to help complete the mission. John Hiler helped with production, recorded overdubs and mixed the album. He's worked with Slayer, Cynic, Hedwig & The Angry Inch, and The Frogs, among many others. The album was mastered by Bob Ludwig. Turn over a classic record from the last four decades and you're bound to see his name attached to it. I wanted to inject crazy energy into the long forgotten AOR format, and I believe I achieved that goal. You're able to hear all the turns and cranks of every instrument as it falls into place on this 9-car thrill ride.

R. Where do you usually gather songwriting inspiration? What is your usual songwriting process?
RL. A lot of things are born out of thoughts or phrases that stumble out of people's mouths. One person in particular who was really good with seeding a song was Conrad Shore. On the new record we have a song called, "Singing Along With The Riff." Conrad really liked that idea of just humming along to whatever it is you're playing at the moment. It's as natural as can be. I took some of his initial thoughts on it and, after he passed, molded it into a bittersweet journey of the artist's relationship with a song, and the hardships that may come with it. Many of our songs evolve like this. For us, however, they generally start out as a nugget of a story and wind up being epic adventures. For better or for worse, we like to push things to levels that no other band would imagine doing in this day and age. We literally imagine a "Cooler" button to hit when it comes to songwriting. You've got to push it. Cue Salt-N-Pepa.

R. Describe your show, visually and musically.
RL. I'll start by saying that we usually have to cram onto every stage we play. Somehow we always make it work. Personally, I like to use tight quarters to my advantage in my performance. I could break out of that cage at any minute. Usually, what ends up breaking is a mic stand. Having 9 people on stage is a spectacle in and of itself. I mean, we have Johnny "Jingles" McCann who floats effortlessly between flute and sax. He's got mad skills. Hell, everyone does. (Quick shout out to bassist Eddie Waters, and my axe men, Chad Lee Pepper and Brad "The Wiz" Wyzowski.) And I will say, that regardless of your taste in music, everyone walks away from our shows a little wobbly from the sheer entertainment factor alone. I stopped doing my straightjacket escape, so don't go asking for it.

R. Tell us about your next shows and why we should be there.
RL. We were asked to headline Revolution Brewing's Oktoberfest on Friday. October 3rd. It's at their brewery here in Chicago. They also got an AC/DC tribute band and a German Polka band to round out the show. It's gonna be fun! Revolution Brewing has always been good about supporting local music. They donate kegs every year to the annual block party at the American Legion FDR Post 923 that I produce. As far as shows, that's it for now.
I'm hoping to do a regional tour of sorts to promote our new album, early next year. Keep up with me at rorylakepresents.com. Thanks you so much.

Summer's Over is out now and available HERE 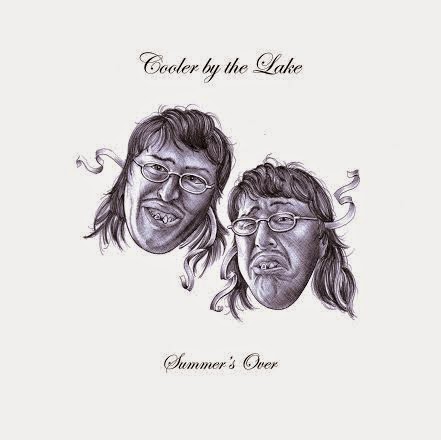