The pharmacological definition of dopamine is "a neurotransmitter in the central nervous system that acts on the brain to control movement, emotion, pain and pleasure. it also forces the contraction of the heart in the treatment of shock." The musical definition of dopamine is Lorelei Carlson and her new album named after the chemical. Dopamine arouses movements and intoxicating and sometimes painful emotions while it grips your heart and heats your blood until it steams in your veins. the effect is mystical, magical, disturbing and addictive.

The child of a bi-national couple of constantly moving diplomats who had lived in seven countries by the time she was 15, she knew she was special as a toddler. She absorbed the culture and music of each of those countries and a determination to put them to work in her own art for the audience that she knew would resonate with her. And they do. With a million downloads on Myspace.com, tens of thousands of followers and multiple albums, she is standing on the cliff of stardom. Dopamine should give her the rush to step off and soar.

The title song immediately immerses you in Lorelei's hallucinogenic world of ache, dreams and lust, coming on with a soft kick drum downbeat and a synth buzz. her ethereal voice that combines pain and dreams together traps you in a claustrophobic nether world of sex, abuse, and resignation but holds you aloof, above it all. He don't care/He don't share/So don't follow/And don't swallow. The urgency rises with the music, her voice surrounding you with churning images of hurt. It's not the way you would/Just like you said you could/He'll pull the arrow good/and strike you like he should. The drum swells and the synth swirls wit her voice, as if rising to a climax and then release But she tells us you escape: What's a woman to do when she's not not chased/Go slip a blue till he's erased. No need to slip a blue, just hit repeat.

From the orgasmic darkness of "Dopamine", Lorelei caresses you languidly with Nirvana's classic "Rape Me", her throaty voice gliding nonchalantly through the disturbing lyrics wit muted drum beats and soft, sometimes electric synth tones. As with "Dopamine", the effect is psychotropic as well as aural, with the synth arrangements coming on and then fading like a drug coursing through your brain. An anti-rape song written by Kurt Cobain as a warning to rapists that they will suffer the same fate someday, she puts her spin on it. She updated the lyrics in interviews with context, pointing out that not only women get raped and that rape is not always sexual. Musically, Lorelei delivers a version that is frightening - she sounds like a passive, smiling former lover sliding a knife blade under your fingernails. few woman, or men for that matter, could pull off this song as unequivocally and as powerfully as Lorelei has.

"Sandcastles" follows the musical and the lyrical landscape, circling gently around death with her signature languid treatment of hard topics. Simple snare hits, and synth pssts carry her while she asks Sandcastles and a glass half full/when I dismantle, will I still be beautiful?. But she has not totally resigned herself to death: Grab ahold of me (I will hold myself in place). "Open Your Eyes" ups the tempo a bit with more complex but still muted drumming - kick and snare combined with a horizon-distant youth violin. The hallucinogenic imagery continues: You opened the door and there you stood/My body lay frozen on the bed/I'm tellin' myself it's in my head.

The tempo rally picks up with "Push the Button (The 8th Floor)" with fast drumming, Lorelei rapping over a distorted male voice repeating "Push the Button". This is the perhaps the most explicit of Lorelei's lyrics about sexual vulnerability and detachment from loveless, perhaps abusive sex. But realistically I prey on top of your bed/When you open the door to my demise/Just sit back and watch as I slip into disguise. As with "Dopamine" the song picks up speed and urgency, moving us to climax while she tells us she is zoning out.

She leaves us with a commentary on life in her adopted home, Los Angeles, where she has lived for the past four years. An observation on the difficultly of honest relationships in the City of the Angeles, "Sunset Blvd" moves with a very spare, restrained drum, bass notes and Lorelei's languorous voice, enhanced with perfectly placed echoes and overdubs. And everything just flows/Like a mid-summer's night breeze blows/I didn't have to try too hard on the boulevard... but here we are lost and found.

The six songs on Dopamine extend her earlier work, especially the album 20MG, But they also go beyond it into deeper and in many ways more personal and lonely territory. The remind me of fresh blood in a test tube: liquid, hot steamy - but passive: the stuff of life, but not of this life. In some ways Lorelei Carlson and Dopamine are the stuff of our lives, but not of our world. But whatever world they are from, you want to go there...

Dopamine is out now and available on iTunes. 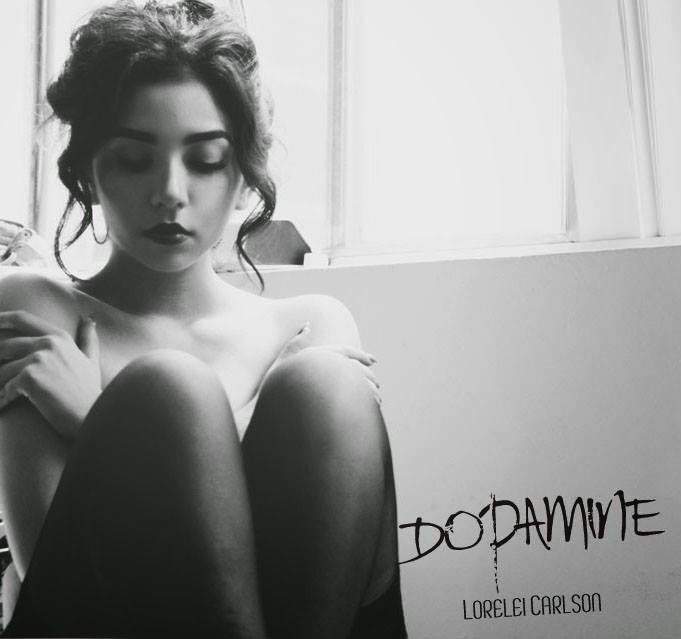