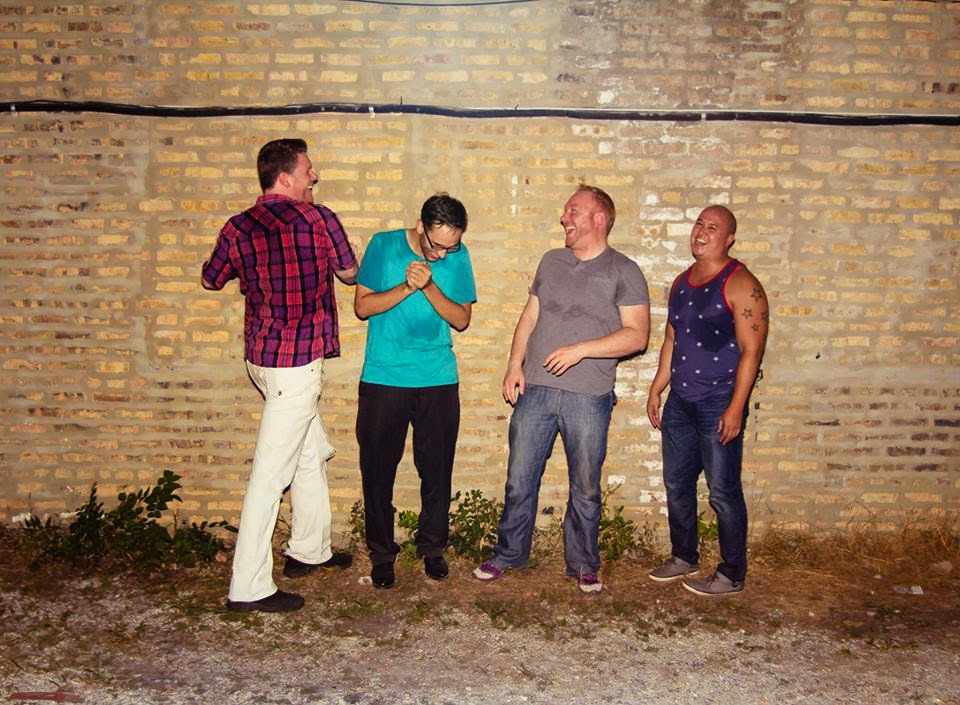 Release: Homer Marrs and the Excellent Adventure is a Chicago-based indie rock act that might get compared to They Might Be Giants  but sounds more like David Sedaris tickle-fighting R.E.M. Or the Lemonheads after Netflixing all five seasons of RuPaul’s Drag Race. Their sound is catchy pop/rock with seriocomic lyrics that make people remember things otherwise forgotten, including emotions that are better left unearthed.

They are five Chicago boys: three gay, two ginger, one hipster and one Blisster. They’ve played shows around town and are starting to tour, so you should totally like them now while it’s still early and cool. Fall 2013 marked the recording of their first LP, produced by Rick Field and titledNSFW.

Homer performed "The Facebook Song" on "Jimmy Kimmel Live" live via Skype in support of the first National UnFriend Day. His video for "A Prayer for Julian Sands" was been featured on BuzzFeed and Film.com.

Homer Marrs and the Excellent Adventure’s latest single, “It’s Amazing,” has an accompanying video directed by Michael Azzato and starring Gia Gunn of RuPaul’s Drag Race. R360 caught up with HMEA to talk about their new release and video.

R. Going right to the heart of the matter: what can you tell us about your new single "It's Amazing." Who writes the songs; what are they about?
HMEA. “It’s Amazing” was inspired by the preponderance of meaningless social media posts we encounter every day. The lyrics are meant to describe selfies aggressively shared by a fictitious character who presents her life online as though it is somehow more significant or less mundane than everyone else’s. Her life is amazing to her but maybe not so much to other people. The follow-up question would be, Does that matter? If we can consider our lives amazing without needing anyone’s stamp of approval, why do we make so much of it public?


I wrote the song (I’m Homer—hi!). The video is chock full of drag queens largely because the song is sung by a man from the perspective of a girl. And because several of us in the band are huge fans of RuPaul’s Drag Race, and perhaps most importantly because the song is a step toward a louder, more masculine sound than our previous efforts, so makeup and dresses seemed to be the perfect way to bring some femininity to it for balance. The last video I did was for the “Bear411” song, and it was all men being manly (though the song itself was lighter), so I wanted to contrast that.

R. I'm loving the diversity in the band. How did you all cross paths?
HMEA. The band came about like patches on a quilt passed around from one befuddled seamstress to another. Everyone is someone I met first, then brought to the others and asked, “Can we keep him?” (The answer was not always yes, but not everyone knows that.) Some have been switch-hitters musically, playing bass or guitar or keys depending on whom we had for a given show, which has been cool but also chaotic. Nick and Matthew I met separately through Craigslist, Arnold I met at a bar, Cody I met when I dated his friend 1,000 years ago, and Hassan and I worked together.

R. What type of band are you? Describe your genre.
HMEA. I use the term “quirky pop/rock,” because the lyrics are sometimes funny, sometimes level, but often peculiar, and “quirky” was the only word I could think of that afforded all those things. The songs are definitely written from a pop perspective sonically—a lot of 1,4,5 progressions with hopefully hummable melodies—and the setup of guitar, bass, drums, keys, vocals as we use them comes across more like rock than anything else.

R. There's a reason mainstream is called mainstream, of course. And I assume that's the easiest kind of song to progress or get heard, right? But if you had to pick another genre, as a hot niche market for a new song, what would it be?
HMEA. If I were to invent a genre for our music, I’d call it “curio pop,” because each song has its own unique personality and back-story, like objects in a curio cabinet.

R. Walks us through the making of the video. Where was it shot, and how was it working with Gia Gunn?
HMEA. The video was shot at Berlin Nightclub in Chicago. Those folks took a big risk letting us shoot there on different days when they were closed for business—we weren’t an established act, we had no label and we basically approached them as strangers. After a meeting and some promises not to set things on fire they agreed to let us use their space, which felt like a big win since the other clubs we reached out to wouldn’t even return our emails.

I was definitely intimidated to work with Gia because I had seen her on Drag Race but had no connection to her in real life. On the show, she definitely had her bitchy moments, which I was nervous she might bring to set, but she also had a lightness about her that suggested the bitchiness was part of the act. And she accidentally created about five catchphrases that several of us had been saying at rehearsal for months.

I didn’t think she would say yes when I reached out to her, again because I didn’t think we were established enough and she was getting gigs in cool faraway places and had a large fan base. Also, I always associated drag with dance or Top 40 music so with our song being alt-rock I thought there was no way she’d be interested. Thankfully, I was wrong. She was all about bringing her A-game to the shoot and had a few new outfits made for it. Her shoot day was long and went longer than it was supposed to, and she barely had a moment when she wasn’t being made up or filming, and she really came off like she was having fun and was happy to be there the whole time. Plus, no bitchiness.

R. Describe your show, visually and musically?
HMEA. Visually we have run the gamut from plain-clothed American Apparel rejects to Jem and the Holograms fronting the Village People, depending on the venue and crowd. The latter is much more fun but can prevent people from taking you seriously. Musically, we err on the side of up-tempo songs that usually start with guitar or acoustic guitar and build to full band. Our songs are short; when we do covers we have done Hole, Depeche Mode, Twisted Sister and Limahl. 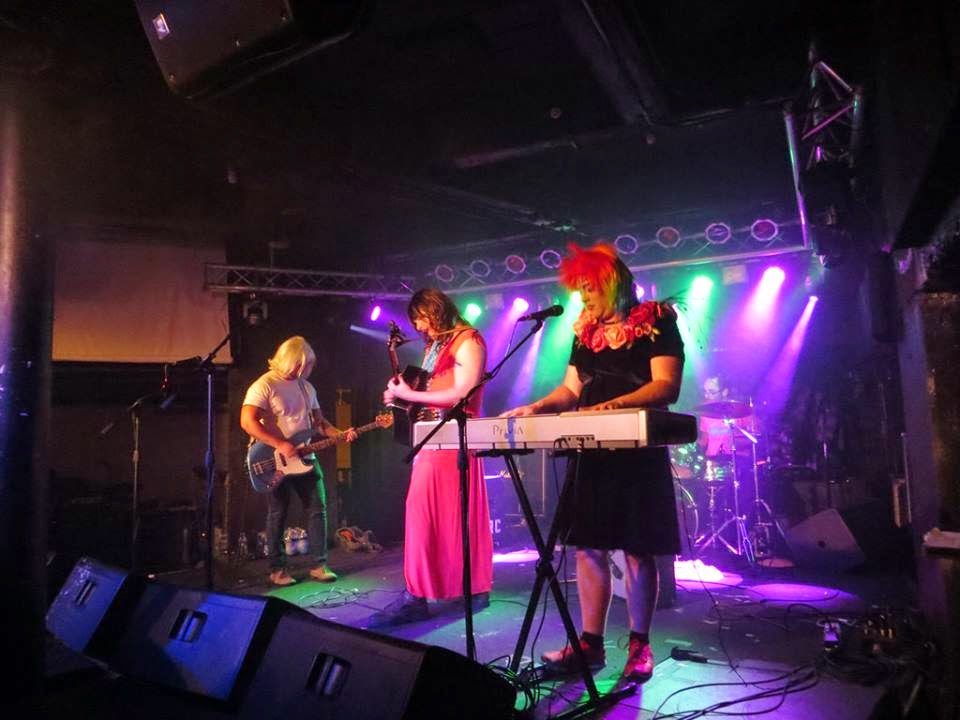 R. What inspires you to do what you do?
HMEA. Sometimes it’s the chance to call attention to something other people have overlooked or maybe forgotten—to help appreciate something that’s underappreciated—and other times it’s catharsis. Life can be overwhelming and I’m one of those people who need a regular artistic outlet just to cope with it all.

R. Tell us about your next shows and why we should be there.
HMEA. Our next show is for the International Pop Overthrow Festival in Chicago, April 21st at the Red Line Tap. You should be there because we make really sexy eyes from the stage that you can’t appreciate in an audio recording. Also, if the name is true people will be throwing pop, which is Midwestern for “soda,” which could make for some exciting visuals and dry-cleaning bills.

It's Amazing is out now and available for download HERE 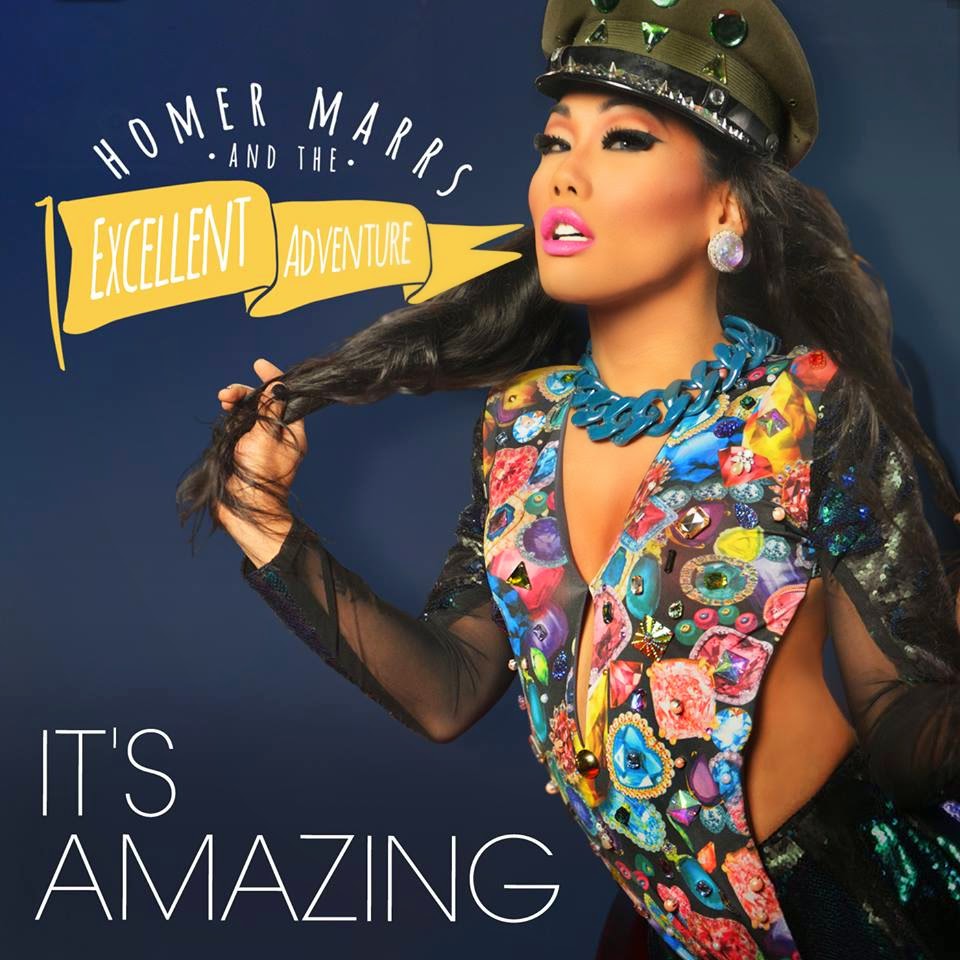