And The Walcotts delivered that magic. The pounded out a generous set of 12 songs, all so high powered and fast moving that you could almost feel the air being pushed off the stage like the exhaust of a jet plane.  If you only knew The Walcotts from their country/folk-tinged videos on YouTube or their downloads, their performance would have been a real eye opener…like a double shot of espresso mainlined into your arm. 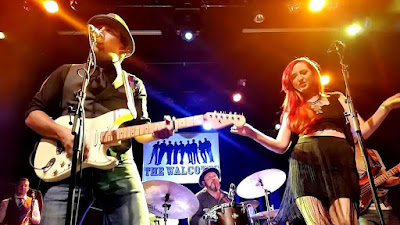 On tour since the beginning of July, but energized by being back home in LA, Tom, Laura, Devin and the gang were obviously on a high themselves. Laughing, getting down with Greg Barn’s heavy blues rock piano riffs and Devin Shea’s red hot violin solos, they moved through “Hanging Tree”, “By the Morning” and “Let Me Take You Home Tonight” like a runaway freight train.  Although Cusimano was looking into a dark cavern he knew was packed with a thousand people who he could not see, he made a real connection with the fans.  You could look around the main hall and see that  there was very little talking, texting, or other distractions going on.  He and the band had this crowd engaged.

After a career that has included smaller stages in LA and elsewhere, giving The Walcotts’ nine band members the run of a full-sized stage was both a release for the band and a visual energizer for the audience.  Laura Marion was able to spread out, shimmy in her little black dress with the fringe, swing her long red hair around  and undulate her arms to Jim Olson’s layered drum beats while she sang.  You could tell she enjoyed the space from her blinding smile -- you could practically see her teeth from the balcony she was having so much fun.

The large space also gave the horn section plenty of room, not only to play but to move, important for the trombone player.  The addition of brass gives The Walcotts, whose name is drawn from the classic band song "W.S. Walcott's Medicine, Show",  a depth and shine in their music,  like the next step in the evolution of a California Americana sound.  In their hands on stage that sound was musically tight, but creatively flexible. While the  beat was solid rock and the feel was folk and country, the mind-meld that happened onstage among the musicians was jazz-like.  Undoubtedly the product of hundreds of hours of gigs and rehearsals, the band seemed to operate as if by telepathy.  The music took on a life of its own as it flowed across the stage from player to player. Sometimes the band moved like a single living being; other times single instruments stepped forward and hooked us by the ears and the feet.

Speaking of feet, the one downside of The Walcotts playing in a large standup venue like the El Rey is there is little room to move and none to dance.  It was hard to resist joining them on stage during “Let the Devil Win or the closing song, “Coalinga” and rocking out. Next time maybe a dance pit instead of the photo pit?

So now where do The Walcotts go now?  My guess is headlining larger venues,  playing openers for arena shows and even top-of- the-ticket at major festivals -- and of course, their own tour. They are that good.  They know how to deliver energy and joy to an audience of any size. The El Rey show  introduced local audiences to the power music that their YouTube videos and Soundcloud downloads don’t capture. The tour with Chris Stapleton has spread their energy and joy far beyond their home base of LA.  The only direction now for The Walcotts to go is up.