Release: Brothers Austin and Alex formed The Noise FM in Fort Scott, Kansas, a town of 8,000 in southeast Kansas. Now we live in Chicago, but everyone knows we’re from Kansas because of our accents. Alex sings, plays guitar and keyboard, and does most of the computer stuff. Austin plays drums, sings and writes a lot of the music on bass guitar, but he doesn’t play bass guitar at live shows because he’s better at drums. We found Barry Ray Kidd on Craigslist and put him on bass because of his rad name.

The Noise FM released the full-length record Dream of the Attack in 2008 at a basement show in the “vintage mansion” they rented while going to school in Lawrence, Kansas. Their landlord called it “vintage” but it really just meant that it was a fire hazard. 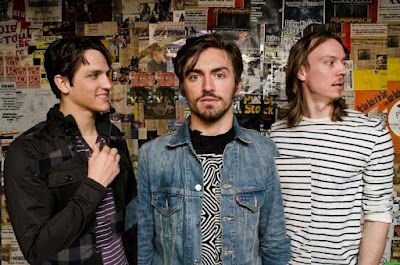 In 2010, the band released Enclave, which earned The Noise FM the title of “Best Indie-Rock Band 2010″ by Pitch magazine in Kansas City. The single “Time Will Tell” was featured in an episode of MTV’s “Made” and on a season two episode of the rebooted “90210.” Subsequently, The Noise FM dropped Attraction in 2014.

The Noise FM have enlisted The Teenage Mutant Ninja Turtles, The Ghostbusters, various X-men and more iconic action figures for an amazing stop motion music video set to the band’s cover of The Police classic “Next To You”. The video was created by the band specifically for twoNoise for Toys benefit concerts that they hosted over the holidays.

The band has toured the US several times over, playing SXSW, CMJ, The Underground Music Showcase in Denver, Middle of the Map in Kansas City, Summerfest in Milwaukee and the occasional fashion show.