(Los Angeles). The Walt Disney Hall can be an intimidating venue for artists. For the artist, standing on a stage crowned by the Manuel Gonzales pipe organ and facing over 2200 fans arrayed in Frank Gehry's shining chrome building requires not only soaring talent, but centered courage combined with humility.  Buika gave the sold-out Hall all that and more on Saturday night in her pairing with LA’s beloved American Latin Music band, La Santa Cecilia – a profound experience but almost too much of a good thing.

But all thoughts of excess disappeared when Buika’s voice rose from the stage into one of the best acoustical environments in the nation, if not the world, Her singing, her lyrics, her laughter and her conversation with the enraptured audience were supernatural, vibrating every square inch of air and every soul in the building.

There is a reason Buika is known as “fearless”; she can weaponize her fiery voice to deliver messages of humanity thwarted and demands for justice.  But she can also stand and deliver  with astonishing vulnerability (she appears naked on the cover of her self-titled Buika album), traversing the shoals of love, heartbreak, passion and self-reflection out in the open for all to see. And she does it in Spanish, English, French and Portuguese. Her unstoppable combination of talent and purpose has brought her awards including a Latin Grammy, multiple Grammy nominations, and recognition by NPR as one of the best 50 voices of all time.

Born María Concepción Balboa to African parents in Palma de Mallorca, Spain, Concha Buika realized early on that her creative DNA was not only something special but held the potential to change lives around the world. Today, that is what she does -- circles the globe from her base in Miami as an irresistible, compelling artistic force.  Her concert at Walt Disney Hall was one of many in her world tour supporting the new Vivir Sin Miedo (To Live Without Fear) album, released by Warner Music in the-fall of 2015.

That compelling force was on full display Saturday night when Buika strode on stage, tall and regal in a flaming full-length red gown and a supernova smile. Backed by a nimble four-piece Latin band  that created a shimmering sonic environment with congas, percussion, guitars, cymbals, keyboard, Buika began the evening with the title song, and her mission in life, “Viver sin Miedo”.

The effect was immediate. The guitars and keyboard created a mysterious landscape of shimmering notes and Buika’s voiced wheeled throughout the hall in a plaintive chant:

“They say I’m going to burn like fire/I try to stay out of trouble/Walk away from the madman/ From the madman who gave me candy/"You will never step into Promised Land Cause God's land do not want dirty shits like you girl". 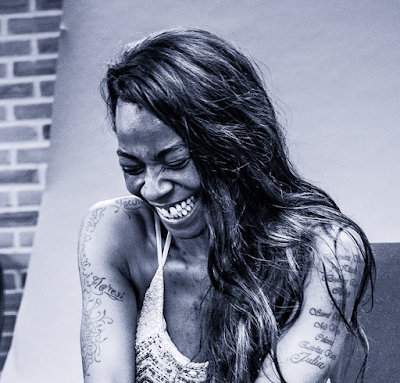 While the final notes hung in the air, she sipped from a wine glass, bantered with the audience, and shifted tempo for “No habrá Nadie en el Mundo” with an African influenced bossa nova beat, her voice dropping an octave as it flowed with the rolling music. The reverie was broken and the party was started.

For the next hour, she sailed us through eight songs, some languid and loving, some filled with Cuban beats, others reminiscent of Jimmy Cliff.  She gave us new songs like, “Siboney”, songs from earlier albums like the gentle “Mi Niña Lola” and “Jodida pero contenta” and the familiar “Amor de Mis Amores”, ending on a crescendo with “Much Dinero” from the new album.

Between songs she joked with the band and the fans, told stories and made political points.  Her connection to over 2000 people was complete, not only through her stunning voice and hypnotic music, but her persona projected to the top rows in the balcony. Switching between Spanish and English she kept everyone included in the banter, so you wouldn’t wonder why your neighbor was laughing or cheering at something she said. At the end as she was given a standing ovation and calls for “otra” (“another”) which were disappointingly not answered as the band had to break down for La Santa Cecilia.

Buika is a supernova star in the American Latin Music firmament, spreading beauty and conscience to millions worldwide with her albums and photographs and book. In person, she is down to earth, as I discovered when I interviewed her for my radio show Friday. Onstage, she is an unforgettable experience, not just for the music but for her larger-than-life presence. Pairing her with LA’s beloved Latin Grammy winner La Santa Cecilia made sense in terms of the same audience – which it largely was – but it was almost too much for one night to support, too much talent, too much joy, too much heart.  I was still vibrating and thinking when La Marisoul danced onstage 20 minutes later as La Santa Cecilia let loose with their unique fusion of Latin and rock that   got me rocking like they do so well. It was a fairy-tale night in a magical music palace.