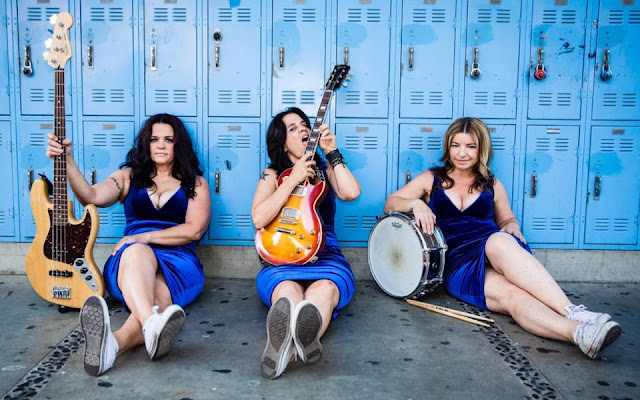 (Los Angeles) No Small Children are a band like no other.  Born on an elementary school playground in the spring of 2012, the trio is school teachers by day and a phenomenally successful hard rock band by night. And they move very fast. Three months after deciding to use their recess breaks as band practice time they had an EP out, countless shows behind them and an East Coast tour booked. Plus, their remake of the classic Ghostbusters theme song was released by RCA Records and is featured in the new Ghostbusters movie. And the band’s original song, ‘Big Steps‘, is featured in the Netflix series, Santa Clarita Diet.  They released their third album, Hold Tight, I’m Flying, in 2015 and singles have flowed steadily since then. Their live shows are insanely animated and can exhaust both the audience and the band. Fortunately, they were not too exhausted to talk with me before heading off on a national tour.

R360. When I saw you live you were insanely fun and so wonderfully over the top. How did that happen? Were you always this way or did teaching grammar school drive you to punk?

Lisa. We were kind of always like this I guess.  Life just drives you in a direction. The thing about this whole vibe that we started with and constantly evolved in – we have been playing for some time - is that it has reckless abandon in it, which is a liberating thing. Once that we discovered that in our music, it feels really good to just unapologetically perform without worry about making mistakes and being poor and just let it all out. And then it spills over into everything and before you know it you are living your life that way and it is pretty fun.

R360. In your act in your public personas, you inhabit the characters of women who are in charge and uncontrollable.  You do what my friend the hard rocker Militia Vox calls disrupting your stereotype – the stereotype of grammar school teachers. Is the band an alter ego that disrupts your stereotypes?

Joanie. What you see is what you get. It is not a character it actually is who we really are. It is a lot easier to just live life as who you really are. And if that breaks stereotypes that are great, but the truth is women have been living like this forever. So we just let our music and its art speak for us. 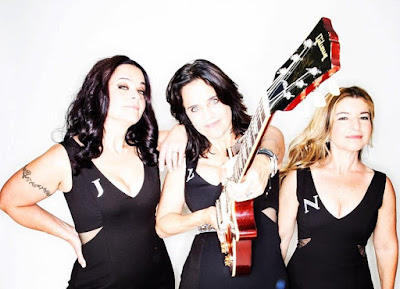 Nicola.  In the olden days, there were all these rules. Teachers had to had who they were – you couldn’t married and other stuff.  But we have become a long way since they and today people say to us they wish they had teachers like you I respond, you did, they had secret lives.

R360. You three also have great chops. Your musicianship is superb. Are you formally trained or self-taught?

Joanie. Each has a kind of different past. I am a trained musicians. I started playing instrument and training in voice. When I was a kid there was only one way to study at that time and it was classical. But my passion for music I learned by ear, emulating people who were a big influence on me. It happened both ways – both of those experiences were valuable and impacted the outcome. We take our music and craft very seriously.

R360. It shows. I especially listened to the drums on your songs, especially on “Radio”. Nicola, you have the energy of someone like Veronica Bellino Jeff Beck and the finesse on the cymbals of a Beth Goodfellow of We Are the West – a nice combination, especially in alt rock. What drew you to drums?

Nicola. Thank you so much. Well, I young with the snare drum. When I was in elementary school, I played it for a couple of years  But I had a lot of energy as a young child and the snare wasn’t doing it for me.  After a while I wanted more so I studied it as young adolescence, they a walked away from it for about 20 years. I didn’t see any role models and poured myself into teaching.  But about 3 years later I felt something was missing and started back up again. Those early years weren’t  lost; I started studying with a phenomenal teacher in Boston I skype with him. I practice now and it is such a joy, especially with a good teacher.

R360. Your song “I Don't Want It” shows off your guitar chops, Lisa, especially in the intro and the bridges.  You are very precise without being restrained, not an easy thing to do in alt rock. Where did that song come from?

Lisa. Online, there was a conversation with a troll on Facebook who was bringing a lot of hatred to the conversation and upsetting people. So I took it private and it got me thinking about how easy it is to spread hatred and how for every thousand of people, there is one person like that and how effective they can be. So I thought what can we do, so I wrote a song. I had a student that I talked to about it while the song was coming together and I took the ideas to our rehearsal space where we work things out. Nicola started playing that kind of James Brown beat and it just kind of took off. That song for us is a very emotional song, especially today when we are getting all this trolling from the top, so it is a kind of middle finger to the powers that be.
R360. Have you ever been harassed or hit on in your gigs or tours?

Joanie.Yes and Yes.There are many funny stories of being in clubs and people not realizing we were the band. We do get hit on, and the type of propositions we get are not the kind we get at the grocery store, but they are flattering nonetheless and harmless. There has never been a time when we felt threatened. If we break a stereotype, that is awesome – we look at it as a teachable moment. People who underestimate us because of our gender, do it from ignorance. We just say that’s ok and then go onstage and melt their faces and have some interesting conversations afterward. 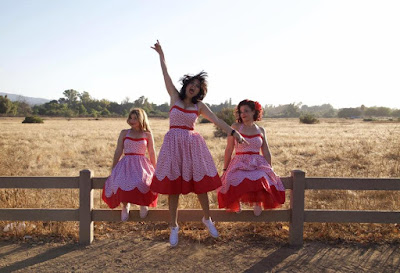 R360. You have a new single coming out. Tell us about it.

Nicola. The song Radio is the last song we store before the election. The first song we wrote after the election is “I don’t believe what you say”…it speaks for itself.  We are impacted by everything going on around us too.  We have been playing it in local clubs and the cool thing is that when we play it by the end of the first chorus we find the room is singing along. It is a unifying song, not a dividing song. It will be released on August 10 and we will be playing it on our tour.

R360. I am sure you get asked a lot about your student's reaction to your music career so I won’t ask that. But I wonder about your principal and other teachers. Do they go to your shows?

Joanie. Our principal loves that we are creating outside of school. It is a great situation.  I don’t think that she realized that it would get to this point, in the beginning, she would come out to see and stuff, but she is 100% behind what we are doing. The other teachers maybe think we are little nuts. When we are at lunch it is hard for us not to talk about the band, so we have to remember to keep it to school stuff. But then again they come out to see us when they can, usually weekends.There are other teachers who do other things and we support them. And some people have young children at home. We are over 40 now and you think when you are a bit older, you might think that this is immature, but we don’t think that way…we want to rock. It doesn’t feel that way. We aren’t sure how other people think except that we are crazy for the hours we keep. But it is real, fun and we love what we do and we will keep doing it.

R360. I notice one of your sponsors is Pinup Girl Clothing. Will there be a No Small Children clothing line some day?

Joanie. We are indeed sponsored by Pinup Girl We have been fans of their brand for some time even before receiving a sponsorship. As the name indicates they do a pinup style of clothing. One of the things we really loved about them is that they celebrate every single size shape, race and age. That was very appealing – at the time I  was a much larger person I lost a lot of weight (Nicola: 120 pounds! ), and one of the things we do, if you have seen our shows, is we wear matching dresses for every single show. It could be challenging to find something that was fun and edgy and rocky and sexy and was in extra small, small, large, whatever. At Pinup Girl we found it and we found that not only had the clothes they celebrated the range. We even talked about creating a dress…maybe we will dig into that idea of our own clothing line.

R360. Ladies, I know you have a national tour coming up, including in Alaska where you will do fund raisers for schools. …folks should check out your website and Facebook page for dates and places, but it looks like it will be a lot of fun. Thank you for taking the time to talk with me today.

No Small Children. Thank you.