Hailing from Atlanta, GA, StarBenders are the half way home for disgruntled misunderstood Generation Y / Z.  Front-woman, Kimi Shelter and her gang have concocted the perfect alchemic blend of androgynous rock and roll power with "stuck in your brain" pop melodies. Not only is Miss Shelter one hell of a guitar player but her voice and song grab you by the throat. Imagine Iggy Pop playing 7 minutes in heaven with Debbie Harry.

Even at her teenage worst, Shelter was pretty innocent but in the tiny Georgia town where she lived, the police didn't have much to do other than hassle punk kids. She was arrested at least six times before the age of fifteen. Terrified her daughter would end up on drugs, Shelter's recovered-alcoholic ex-flower-child mother sent her to a nature-healing camp in the middle of nowhere.  Camp is where she met drummer Katie Herron, who was born into a Pentecostal family near Huntsville, Alabama.  A “quiet but scrappy” girl, Herron fascinated Shelter. “Katie has always been mysterious to me, but at the same time we had an understanding from the start." 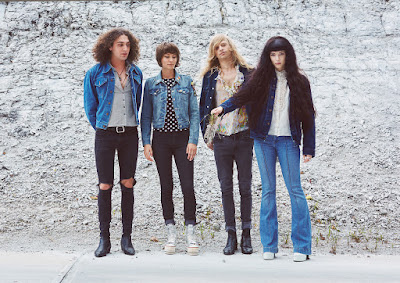 The two made a pact that one day they'd create a rock & roll band together. After they left camp, the girls eventually lost touch both playing in different bands.  Their musical personalities slowly emerged until Kimi’s rock & roll visions drew them back together in 2013 to form StarBenders. "All of a sudden," Shelter says, "Katie was right there with me again”.

They discovered bassist Aaronoius Monk outside an infamous Atlanta dive bar after he was booted in the wake of an altercation.  "He was sitting on the curb smoking a cigarette.  I sat down and we started talking. We've been friends ever since.”  Guitarist Chris Tokaji was the final member to join. The nineteen year old was jamming in a local rehearsal space when a mutual friend of the band heard his amp through the wall. Kimi was quickly urged to meet him. “Chris’s excitement and vibe is contagious....it is pure, inspiring us to go much further with our creative ambitions.” Kimi Shelter shares.  Since then, Tokaji has been adopted as the baby of the group. Each member’s story is riddled with overcoming struggle and angst, as reflected in their music. "That's why we work so well together,” “It's one of those situations where different paths lead to the same place." StarBenders have just released their first full length, Heavy Petting through Institution Records.  Look out for these celestial kids to bend your ears and hearts on stages across the globe.