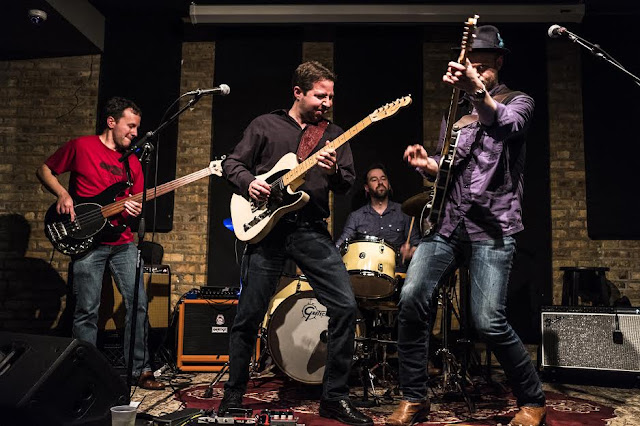 (Release) “A simple thing can break your heart” is not only the first line from the first single on Kid Bear’s new EP; it’s also a manifesto of sorts for the band’s music. The song itself is three chords and a melody that, more or less, repeats throughout in different octaves, but the emotions run deep and the band plays with the dynamics and the arrangement to make something that steadily builds to a climax throughout its 3 1/2 minute runtime.

A chance encounter with country legend Steve Earle changed everything for guitarist and songwriter, Matt Neuroth. As Matt tells it, “I was sitting in Matt Umanov Guitars in Greenwich Village and in walks Steve Earle. He picked up an acoustic guitar and just started strumming some chords. And…I don’t know how to put it except to say that, when he played G and C, it was every country song ever written. When I played G and C, it was just a couple of chords. But, when he did it, it was deep; it had soul and groove and power. It really blew my mind. I’d been touring with all these loud rock bands (including Oh My God) and had all these chops, but he had the song in every strum. I’ve been chasing that ever since.”

Under the name Kid Bear, Matt continues to pursue that powerful simplicity, both as a full band and as a solo singer-songwriter. The resulting music is somewhere on the rock and roll side of Americana with simple chord changes and melodies married to heartfelt emotions and old-fashioned storytelling.

“One of the things I’ve most appreciated about the various Americana traditions of songwriting is that, at the end of the day, it’s music for adults. I mean…I love a raunchy Zeppelin or Stones song as much as anything, but it’s revelatory to realize that there is drama and passion and excitement in the kind of everyday lives that most of us live. And to realize that, if you are good at it, you can put that in a song! That’s been transformative for me,” says Matt.